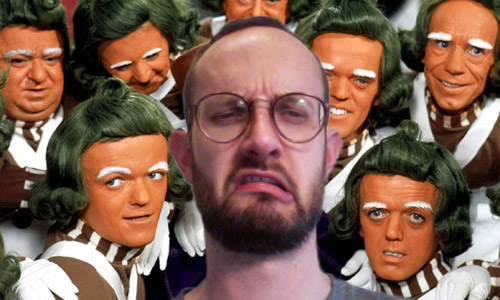 5) Star Wars: The Empire Strikes Back

In the second instalment — now the fifth— of the Star Wars trilogy — now a confusing mess — Darth Vader ruthlessly hacks off Luke Skywalker’s hand during a lightsaber battle. The producers of the film tried to make this less horrific for younger audiences by omitting any bloodshed — apparently lightsabers cauterize wounds. Cut to: a parent explaining the process of cauterization to a seven-year-old, using terms like “burning flesh” and “stump”. Now that’s family fun.

Besides being one of the most depressing films of all time, Bambi also has some surprisingly sexual content. Traditionally, Walt Disney animators are a bunch of creepy perverts who get thrills from inserting subliminal sex messages into kid’s films. There’s the cloud of dust in Lion King that spells out “sex”, the priest with a boner in The Little Mermaid, and of course the infamous “good teenagers take off your clothes” line from Aladdin. I guess it’s not surprising that in Bambi, when Thumper gets a kiss from his new girlfriend, he very obviously has an orgasm on screen.

Jim Henson’s intelligent and moving fantasy epic, told with breathtaking puppetry and a magical soundtrack, has been more accurately described as ninety minutes of David Bowie’s massive dick straining against a pair of purple tights.

2) Willy Wonka and the Chocolate Factory

Probably one of the most criticised children’s films of all time, mainly due to the scene on Willy Wonka’s psychedelic boat ride of death and off-key singing. Oh, and the way that nearly every child is horribly killed throughout the film. I have no problem with that, per se. Most of the child related deaths in Willy Wonka are occupational health and safety related, and I imagine pretty standard for most factory tours. But what about the scene where Charlie and his Grandfather drink lemonade that causes levitation? It makes them float up towards a set of spinning blades, for God’s sake! That shit is evil. There is no reason to put a turbine above a shelf of lemonade. It’s not proper industrial engineering, it’s more like a trap from the Saw movie franchise.

Who the hell thought this film was suitable for anyone? A witch with interchangeable heads? Men with wheels for hands and feet? A freakish pumpkin jack-o-lantern man? Why not just give your child some mescaline and be done with it.