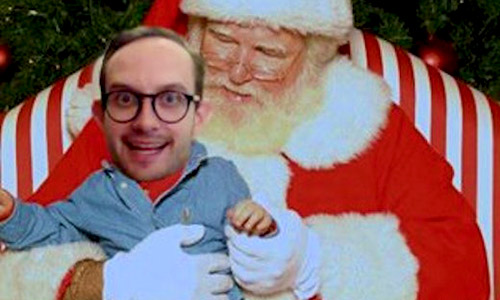 1) I will wake up with a hangover

There’s just something about Christmas Eve—I have no off switch. Maybe it’s the anticipation, maybe it’s because it’s the only four-day weekend I ever seem to have off from work. But if I sit down for a relaxing beer I’ll shotgun the whole six-pack. If I open a bottle of red it will suddenly be empty and I’ll wind up standing in the bathroom with tinsel wrapped around my neck, singing Christmas Carols into the mirror.

2) I will be criticised for my gift-wrapping skills

For the most part I was raised by women, and in our house being unable to gift-wrap was akin to being unable to take a high-mark or scull a pint. My wrapping skills are subpar. I just can’t get the edges even and the folds perpendicular. My bows look like undercooked spaghetti. When I hand my sister or mother a present wrapped in a wad of crinkled, patterned paper they always smirk and say, “You wrapped this yourself, didn’t you?”

My 92-year-old grandmother is a certified petrol-head. She drove heavy trucks in World War II. Every year she bemoans my lack of vehicular ability. I’m actually considering lying and telling her, “I got my licence and I’ve bought a Holden, yes—a Holden. Is that the kind you like?”

4) I will watch Black Books.

I just have to watch this seminal British comedy this time of year. There’s just something about watching a group of drunk people snark at each other that reminds me of the holiday season.

I once asked an Indian cab driver if he celebrated Christmas and he said no, but a village close to where he grew up did. He told me that him and his brothers would visit and enjoy all the Christimas decorations and festivities. I remarked that it was strange to think of Christmas being celebrated in India and he glanced at me and said, “Well, two percent of people in India are Christian. So with the high population, there are more people celebrating Christmas in India than in Australia.”

And all I wanted for Christmas was MY MIND BLOWN.